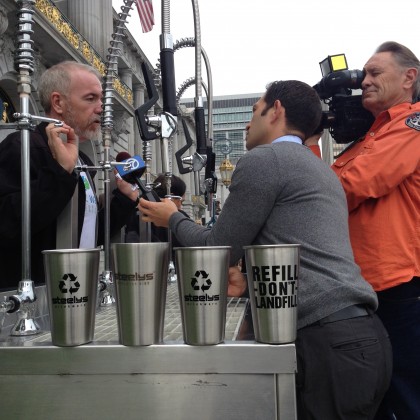 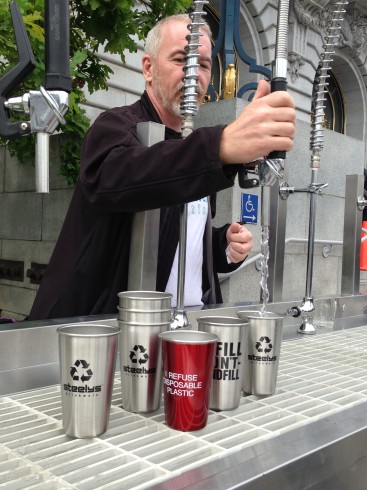 As our beautiful home city of San Francisco was poised to approve one of the strictest bottled water bans in the country today, Steelys joined city officials and zero waste activists to support the initiative on the steps of City Hall.

Board of Supervisors president, David Chiu, who wrote the proposed legislation, hosted a press conference just before the historic vote. To underscore the advantages of free tap water, San Francisco Public Utilities Commission and Corporate Accountability International’s Think Outside the Bottle campaign challenged the public attending to a blind taste test of San Francisco’s tap water versus bottled water. Reusable steel water bottles and cups were provided to even participants.

Shortly after the taste test the Board of Supervisors Tuesday approved a measure that would ban the sale of items at events held on city property.This legislation would prohibit the sale of non-sparkling, unflavored, water in a bottle under 21 fluid oz, from public property, including any variation of mobile food operator or vendors. The proposal also outlawed the sale of bottled drinking water on city property for outdoor events starting in 2016.

The ban will build upon an existing city ordinance from 2007 that prohibits the use of city money to purchase bottled water, an initiative that cut $500,000 of annual city spending on a product environmentalists warn creates unnecessary waste and uses excessive natural resources. The proposal also calls for more drinking fountains and water bottle refilling stations throughout San Francisco.