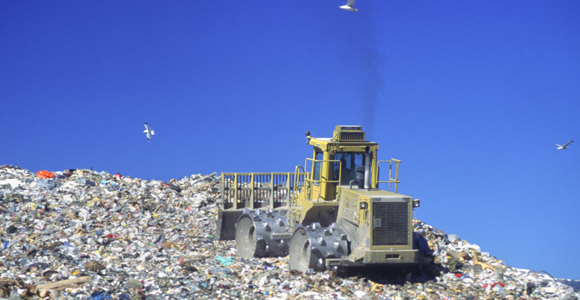 The staggering amount of landfill waste produced each year poses enormous challenges for the health of our planet.

Despite efforts by many of us to “Reduce, Reuse and Recycle”, the fact is we’re generating more landfill trash now than ever before. Worse yet, our waste is projected to nearly double globally over the next 15 years.

Today, the average American throws out about 1,000 pounds of garbage each year. Americans generated about 250 million tons of trash last year, according to U.S. EPA estimates. Globally, we’re producing a colossal 1.3 billion tons of landfill waste annually, with a projected increase to 2.2 billion tons by 2025.

The environmental problems caused by landfills are numerous. Due to massive global scale, some say the scope of our global trash crisis could exceed the challenges we currently face with climate change.

Our landfill problems not only can be compared to climate change, but they also contribute to it. As organic material such as food scraps break down in a landfill, they eventually release methane into the atmosphere. This greenhouse gas is 21 times more potent than carbon dioxide. Methane from landfill sites account for 12% of total global methane emissions and almost 5% of total greenhouse gas emissions.

Toxic waste that leaches from landfills into our soil and groundwater are extremely harmful to human, animal and plant life. The protective barriers and stricter standards of modern landfills only delay the inevitable. Even though today’s landfills cannot legally receive “hazardous” wastes, they can still slip in, resulting in a dangerous toxic soup. Aside from industrial and household chemicals, growing amounts of electronic waste containing lead, cadmium, and mercury are serious threats to water quality issues. The EPA reports that in 2009, of the 2.37 million tons of electronic waste, 25 percent or less were recycled. Noxious e-waste materials accumulate and can eventually penetrate landfill linings or be washed away periodically by rain and into our municipal water supplies.

Tougher environmental standards instituted have resulted in waste management companies closing many facilities. Local dump sites have been replaced by a smaller number of regional “mega” landfills, often located hundreds of miles away. Between 1986 and 2009, the number of U.S. landfills decreased from 7,683 to 1,908 – a 75% decline in less than 25 years. Waste now has to travel farther from your trash can to the landfill. The longer trips mean more greenhouse gas emissions from trucks, trains, and barges. Depending on the route, one ton of garbage traveling 500 miles by train could generate 115 pounds of carbon dioxide. Trucking is even less efficient, and produces more air pollution.

The billions of tons of junk we’re depositing into landfills are creating problems for future generations that we don’t yet even fully understand. Much of this buried garbage — especially petroleum-based plastics or polystyrene used to make bottles, cups and containers — breaks down at a very slow rate and contain known toxins. The U.S. EPA estimates that plastic containers constitute close to 50% of recyclable landfill waste, and that Americans currently only recycle about 27 percent of plastic bottles. The remaining 73% goes to landfill, or is dumped in the environment. Because plastic containers have only been around for about 60 years, there’s no firsthand evidence of their decomposition rate. Some sources cite a 500-year estimate, while others use a more conservative lifespan of 1,000 years, or more. Regardless of who is correct, these figures underscore the fact that today’s landfill waste will cause difficulties for a very, very long time. It’s not a nice mess to leave our grandchildren.

We Can Make a Difference

In the final analysis, most sustainability experts say reduction and reuse are the most effective ways to maintain our natural resources, protect the environment, and save money. The Steelys® Drinkware line was specifically designed to embrace these critical Zero Waste principles.

All Steelys® cups and bottles are made with strong, lightweight, food-grade stainless steel that is completely non-toxic and can be reused for a lifetime. Our products can be kept out of the waste stream, passed on to others, or fully recycled at the end of their useful life. Steelys® provide corporate and institutional buyers with stylish, economical, custom-branded alternatives to the billions of disposable cup and bottles sent to landfills each year.

We may not be able to completely eliminate the garbage we generate at home and work, but by changing bad habits and encouraging reuse we can collectively take small steps that add up to a large move forward.

The EPA offers additional simple tips that anyone can integrate into their life to lessen their impact.